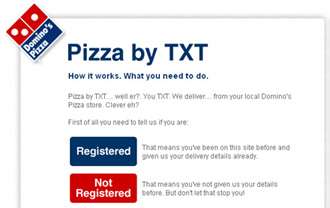 Bianca — November 20, 2007 — Tech
References: news.yahoo
Share on Facebook Share on Twitter Share on LinkedIn Share on Pinterest
"2 lrg chz pizzas plz," could be the next message you type into your cell phone the next time you get the munchies. Papa John's and Domino's have decided to begin accepting pizza orders via text message. Now you can order anytime, from anywhere, to help better fulfill your greasy cravings.

"Louisville-based Papa John's International Inc. this week rolled out its text message ordering option at its 2,700 U.S. restaurants. It's a progression from the pizza maker's online ordering, which began in 2001 and now accounts for nearly 20 percent of its U.S. sales," Yahoo news reported.

"Domino's Pizza Inc. has taken it another step, recently starting a system that lets customers place orders from Web-enabled mobile devices. The new ordering system, launched about 2 1/2 months ago, is now available at about 3,000 Domino's locations and will spread to all of the chain's approximately 5,100 U.S. restaurants next year."

In a way, it makes a lot of sense. Provided there's no drinking and texting going on, the hungry can double check the accuracy of the order, and have no one to blame but their own intoxicated fingers.
3.5
Score
Popularity
Activity
Freshness
Get the 2021 Trend Report FREE