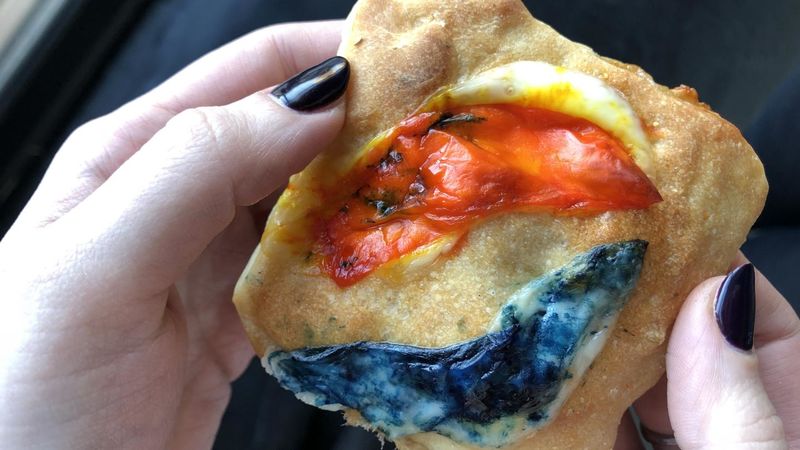 Justin Lam — January 22, 2018 — Pop Culture
References: vice & cbc
Share on Facebook Share on Twitter Share on LinkedIn Share on Pinterest
Cashing in on an infamous Internet movement, Vinnie's Pizzeria is selling the Pied Pod calzone. These miniature calzones are a hilarious take on the incredibly dangerous Internet stunts that involve teens eating Tide detergent pods. Made to resemble the laundry detergent pods, the Pied Pod calzone is simply a pepperoni-stuffed calzone with dyed cheese swirls on top. The Pied Pods are being marked by the pizzeria as a safe alternative for teens enamored by the viral phenomenon, and are quick to remind that its Pied Pods are 100% edible.

The viral Tide Pod-eating stunt quickly made new headlines for its incredible danger and all-around ridiculousness. This strange stunt first began with a simple remark that the pods looks appetizing and quickly spiraled out of control. The situation has been parodied, memed and covered by a staggering amount of media outlets, and even led to statements/videos from YouTube, the US Government and football star Rob Gronkowski, all condemning the act. Vinnie's Pizzeria is not the first restaurant to jump in on this Internet-inspired challenge, as Tide-like donuts have also been made and sold.
5.8
Score
Popularity
Activity
Freshness
Get Better and Faster