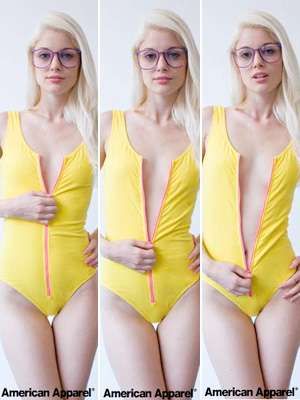 To provide explanation –- albeit an unconvincing one –- American Apparel’s creative director, Marsha Brady (seriously!) insisted in the statement that because the company sells year-round basics, they have to rely on the personal style of their employees to display the clothes in stylish ways that will sell. Basically, as Brady suggests, the clothes act as art supplies (my opinion: make your clothes more interesting and they’ll sell themselves).

According to Brady, “One of the things we look for is an ability to take our products, make them exciting, and show cool they can look, which doesn’t have much to do with being pretty.”

Sure, but being pretty helps. After all, the company admitted that sometimes they don’t even hire models, but use employees and real people in their ads –- and I’ve never seen an American Apparel ad without an attractive, model-esque young person, have you?
5.3
Score
Popularity
Activity
Freshness
Attend Future Festival