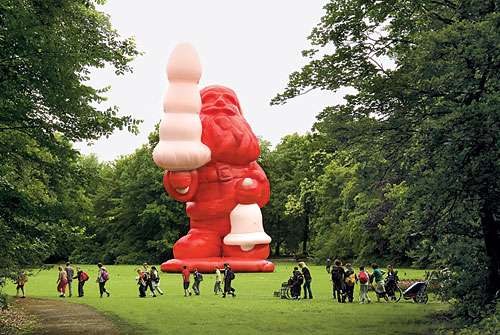 Jennifer Astle — December 16, 2008 — Naughty
References: artinfo
Share on Facebook Share on Twitter Share on LinkedIn Share on Pinterest
Paul McCarthy is known for his bizarre art and his versions of Santa seem to surface each December, with this year being no exception. Gone are the days when Santa held a tree in McCarthy's sculptures, he's moved on...to butt plugs.

This year, apparently Santa really wants to deck your halls! This sculpture depicts Santa himself brandishing a rather large butt plug instead of a tree. Additionally, you can purchase chocolate (yes, really) replicas of the sculpture.

Implications - Now, personally, I find this more than a little creepy. It's avant-garde art, but a bit much for my taste. Nevertheless, it doesn't mean this wouldn't make the perfect gift for that special friend of yours with a sense of humor that usually embarrasses you. If given to the right person, you could be celebrated as a gift-shopper who thinks "outside the box."

Or brandished a creep.