Fuel That Grows on Trees
Next
Set of
Related
Ideas 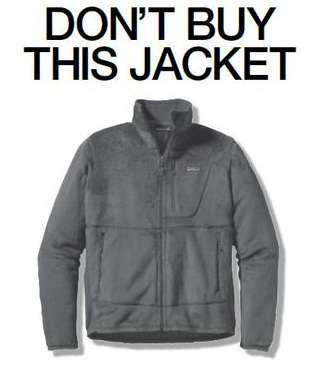 Katherinev123 — November 30, 2011 — Eco
References: thecleanestline & popsop
Share on Facebook Share on Twitter Share on LinkedIn Share on Pinterest
For Black Friday, the outdoor clothing company Patagonia ran an ad in the New York Times that I'm sure caused many readers to do a double-take. Probably to only ad to encourage readers to spend less on Black Friday, the Patagonia New York Times ad asked people not to buy the brand's R2 jacket, which is one of Patagonia's best-selling products.

The Patagonia New York Times ad is part of the company's Common Threads campaign, a sustainability initiative that asks its customers to reuse, recycle, repair or reduce their clothing and equipment. According to the company, each article of clothing -- organic or not -- will emit several times its weight in greenhouse gases, generate half a garment's worth of scrap and reduce amounts of freshwater. For example, the R2 jacket shown in the Patagonia New York Times ad requires 135 liters of water to make and generates 20 pounds of carbon dioxide from its origin to the company's warehouse in Reno.