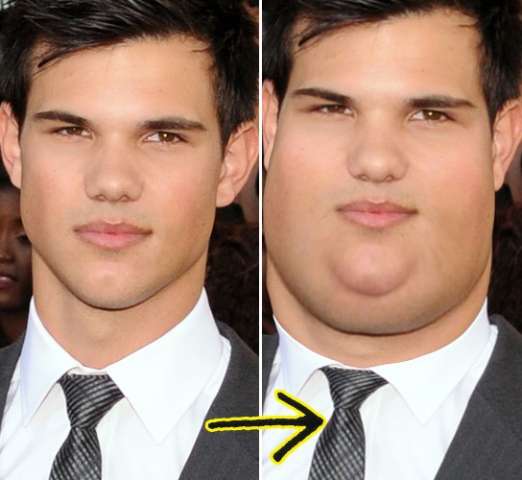 The Overweight Twilight Actors Gallery Packs on the Pounds

Michael Hines — March 10, 2011 — Lifestyle
References: hollywoodlife & buzzfeed
Hollywood Life has compiled a hilarious gallery of what the stars of Twilight would look like if the put on a few pounds. The overweight Twilight actors gallery shows the stars of the hit films in an incredibly unflattering and potentially foreshadowing way.

If you have ever wondered what Robert Pattinson or Kristen Stewart would look like with a double chin then you have definitely got to check out these overweight Twilight actors photos.

My favorite from the overweight Twilight actors gallery has to be the fat Taylor Lautner. The hunky teenage actor is given a makeover that is bound to break the hearts of tweens and teens across the globe. If you don't wish to poison your mind with visions of a chunkier Twilight cast, you can always keep clicking below to see Twilight photoshoots, products, and other things containing images of the Twilight actors in their true, more well-maintained form.
6.3
Score
Popularity
Activity
Freshness