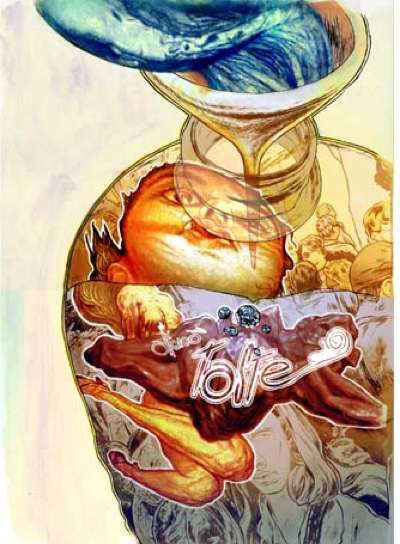 ‘One Out of a Hundred' Compares Media Culture to Illicit Drugs

Marissa Brassfield — February 6, 2009 — Art & Design
References: johnmalloy.net & johnmalloy.net
We’ve often joked that our addictions to celebrity and media culture are an addiction; artist John Malloy’s solo exhibit ‘One Out of a Hundred’ pushes this metaphor further by comparing the effects of media culture on the psyche to the side effects of drugs.

‘One Out of a Hundred’ consists of seven pieces that are named for the side effects they depict. In order of their appearance in the gallery, there’s “Altered Taste,” “Dry Mouth,” “Fatigue,” “Muscle Twitches,” “Rash,” “Sedation,” and “Weight Loss.” John Malloy’s solo exhibit opens at the Art Whino Gallery outside of Washington, D.C. on Saturday, February 21 and is free to the public.
1.7
Score
Popularity
Activity
Freshness