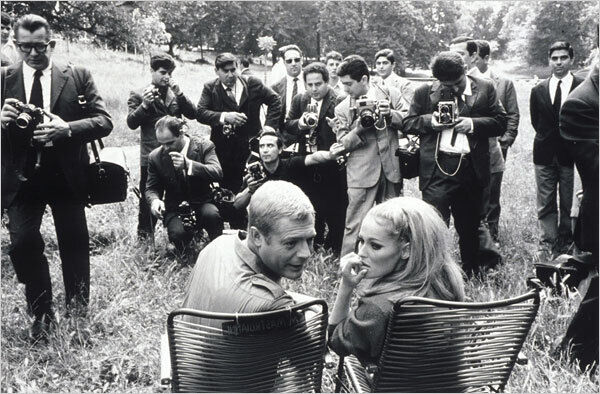 Pigozzi and the Paparazzi

The photos in the Pigozzi and the Paparazzi collection are a marvelous blast from the past, showcasing celebrities from the days of Studio 54 to present. They include works by Salomon, Weegee, Galella, Quinn, Angeli, Secchiaroli, Pigozzi and Helmut Newton.

The first photo in the gallery, taken by by Tazio Secchiaroli, dates back to 1964 and features blonde bombshell Ursula Andress and Marcello Mastroianni in Rome. The second is a 1977 shot of Prince Albert, Prince Charles and Princess Caroline celebrating in a Monte Carlo limousine. It's really difficult not to appreciate image three of Giovanni Agnelli jumping off his boat in St. Tropez in 1977.

"We encounter Alain Delon and Prince Charles, Mick Jagger and Woody Allen, Sophia Loren and Grace Kelly, Brigitte Bardot and Gina Lollobrigida at parties, on the street, at the beach and so on," the Helmut Newton Foundation site says. "Most of these pictures were taken 'from a safe distanceâ€ with the photographer going unnoticed. The stars were often taken by surprise and their pictures are usually, so to say, 'stole,.'"

There are a series of photos in the gallery that highlight the retro, luxury leisure of the CÃ´te d'Azur and Cannes in the 1950s. The days of heavily tanned skin and big hair are well showcased, as are the outrageous South of France boat parties which are still a celebrity favourite today.