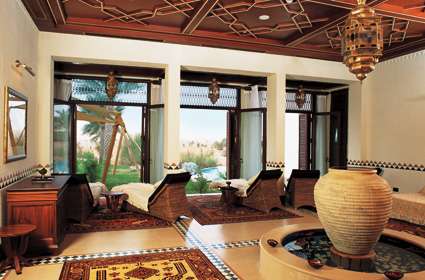 Kyla Schmidt — August 20, 2007 — Art & Design
References: forbestraveler
Share on Facebook Share on Twitter Share on LinkedIn Share on Pinterest
Forbes Traveler recently released a list of the oddest hotels in the world. Trendhunter has previously published articles on the Pitcher Inn and Winvian: 2 luxury hotels in Vermont and Connecticut, as well as Jules' Undersea Lodge, the underwater hotel located in Florida. But also on the list are some of these odd balls you might not yet have heard of. My money is on the treehouses!!!

Al Maha Desert Resort and Spa
According to Forbes "This exclusive oasis was developed by Emirates Airlines in the desert outside of Dubai. Designed to resemble a Bedouin camp, the resort has suites, each with its own private swimming pool, and a spa with frankincense-scented treatments. Activities include safari field trips on foot or in an air-conditioned, four-wheel-drive vehicle, camel-trekking and falconry demonstrations"

Anatolian Houses
"Located in caves in the surreal volcanic landscape of Cappadocia, a UNESCO World Heritage site, this hotel has luxuriously decorated suites fitted with everything from LCD TVs to jacuzzis. A hiding place for Christians during the Roman era, Cappadocia offers not only sightseeing, but also trekking, hot-air-balloon rides, rafting and skiing"

Baron Island
"A volcanic island in the â€œMar Menorâ€ lagoon just off the southern Spanish Mediterranean coast, Baron Island is a 220-acre nature reserve whose coastline is dotted with small beaches perfect for strolling, bird-watching, swimming or diving. Up to twelve guests can sleep either in cottages or in a watchtower built in the 1950's from a design by Frank Lloyd Wright. This is a great place to literally get away from it all"

Costa Rica Tree House Lodge
"Located on Costa Rica's Caribbean Coast, the lodge's tree house is built of sustainable hardwoods taken from trees that fell in the rainforest; the treehouse has two rooms that sleep up to six. Views of the rainforest surround guests, who also have access to a 300-meter private beachfront. Surfing and white-water rafting are available."

Kube Hotel
"This 41-room Paris hotel for the design-forward opened last year, and features guest rooms that are angular, white and accented with brightly colored furniture and opaque night tables that resemble ice cubes; a fingerprint scan opens their door. Bathroom toilets are located in gray, windowless closets, similar to airplane lavatories; bathtubs are designed by Philippe Starck. The lobby has been described as a â€œsci-fi bordello.â€

Ngong House
"Located on ten acres in the outskirts of Nairobi near the coffee farm of Karen Blixen, author of â€œOut of Africa,â€ this hotel is run by a former Belgian diplomat. Accommodations are in treehouses, a private cottage and log cabin; elevated 15 feet off the ground, the treehouses offer gorgeous views of the bush and Ngong Hills. Breakfast and lunch are served under acacia trees in the garden, while dinner is served in a candle-lit, thatched rondaval with a grand fireplace."

Check out some of the strangest hotels Trend Hunter has mentioned before: