NYC Goes Green For Christmas
Next
Set of
Related
Ideas 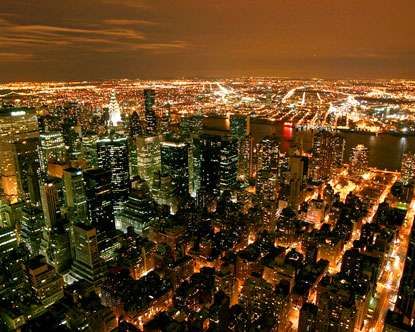 Bianca — November 6, 2008 — Eco
References: environmentalleader
Share on Facebook Share on Twitter Share on LinkedIn Share on Pinterest
New York's twinkling night skyline has been one of the most iconic visuals the city has boasted for decades. With energy efficiency at the forefront of our minds in recent years, there have been debates about how much energy is wasted simply to make a statement of phenomenal architectural pride.

Until now, environmental woes haven't been enough to make a different. Now that the economy is collapsing, however, New York City has shown its commitment to dimming the skyline.

In addition to many switching to LED lights, some owners are toying with the idea of charging tenants for their energy use.

The cost of energy wasted lighting architectural exteriors is also being looked at.

"Some companies are now opting to light only the crown of buildings instead of the top floors to show off the architecture," Environmental Leader said.

Some skyscrapers also plan to integrate motion sensors that would ensure interior lights shut off when the last employees leave. (That would also make romantic after-hours affairs a little more obvious, wouldn't it?)

New York is showing an eco-commitment in several ways, a great indicator of global change as the city is a huge influence on international trends.

Check out some more ways New York is setting green trends below.