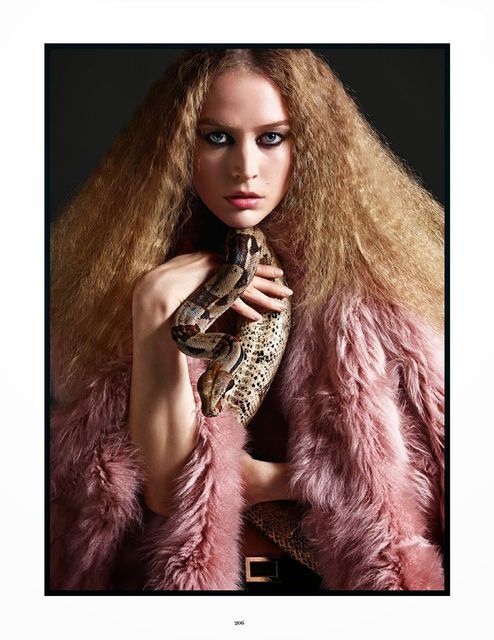 Jordy E — July 22, 2014 — Fashion
References: vogue.fr & fashioncopious.typepad
Share on Facebook Share on Twitter Share on LinkedIn Share on Pinterest
The Vogue Paris Nouvelle Eve editorial provides an excessively glamorous take on the Garden of Eden. In the photoshoot, model Raquel Zimmermann posed with a ginormous snake, demonstrating her daring side as she sported the animal in a variety of intertwined positions.

Stylist Melanie Ward managed to draw the attention of Vogue Paris readers to not only the snake, but also to the apparel sported by Zimmermann. In each shot, she was found clad in 1970s era looks via puffy fur jackets, large overhanging pea coats and pink feathered frocks, adding even more playful elements to the already funky production.

Photographer Mario Sorrenti infused his own brand of funk into this series. Bright neon lighting were contrasted with black and white finishes, infusing the set with alluring elements.