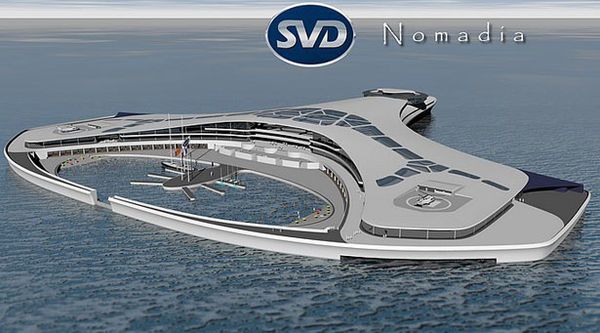 Nomadia by Sylvain Viau is a Future-Forward Water World

Michael Hines — October 30, 2013 — Unique
References: svdesign.fr & tuvie
Share on Facebook Share on Twitter Share on LinkedIn Share on Pinterest
It's a little difficult to explain just what exactly Nomadia by Sylvain Viau is. For starters, Nomadia is an oceangoing vessel. But that being said, it's also a floating island complete with swimming pools, living spaces, restaurants and entertainment centers. Oh, and it also features its own marina.

Nomadia by Sylvain Viau draws part of the power needed to operate as a floating island from the waves of the ocean. While it can technically sail, the concept isn't exactly designed to cross the seven seas. It's more suited for slow trips between seaside towns. Nomadia is an interesting concept, to say the least. Floating islands have been getting more play from designers as of late, and it may only be a matter of time before cruise ships make way for artificial, mobile islands.
6.5
Score
Popularity
Activity
Freshness
Attend Future Festival