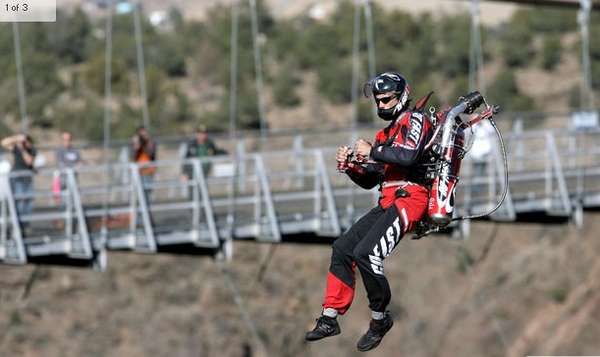 Rich — November 26, 2008 — Tech
References: krdo
Share on Facebook Share on Twitter Share on LinkedIn Share on Pinterest
On November 24, 2008, Eric Scott took his spot in the record books, flying the highest and furthest with a jet-pack. If it was not already a daring enough record attempt, he decided to set the record flying over a 1,000ft deep canyon...without a parachute!

His response? "This is the biggest adrenaline rush I've ever gotten!"

It was not an attempt to investigate alternatives to using the bridge that spans the Canyon, but a publicity stunt used to promote the Go Fast Sports & Beverage company.

Powered by a hydrogen-peroxide-powered jet pack, Scott covered the 1,500 ft span of the Royal Gorge Canyon, in Canon City, Colorado, and reached the safety of the other side in only 21 seconds. His $200,000 jet pack was developed by Jet Pack International. Based on 60’s military technology, the jet pack is capable of speeds of up to 75 mph.
2.8
Score
Popularity
Activity
Freshness
Attend Future Festival