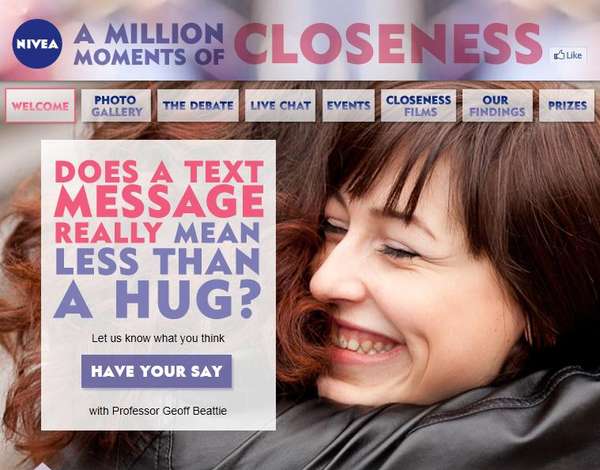 Katherine Vong — August 28, 2011 — Marketing
References: apps.facebook & popsop
The Nivea 'A million moments of closeness' promotion is part of its larger, integrated marketing campaign '100 years skincare for life,' which kicked off earlier this year to celebrate the skincare brand's 100th anniversary.

Developed by Life Agency, the Nivea 'A million moments of closeness' targets women 30 to 54 years of age. It encourages them to participate in the promotion by using Nivea's Facebook application and joining in on sections like 'The Debate' or 'Live Chat.' Here they can also watch 'Closeness Films,' 60-second films made by students from The London Film Academy that are all centered on the theme of closeness. Any users who participate -- for instance, by sharing their own photos on the closeness theme, liking others' photos or making comments -- are automatically entered to win prizes.
3.8
Score
Popularity
Activity
Freshness

Sofas With Cellulite
Nivea Before and After Furniture