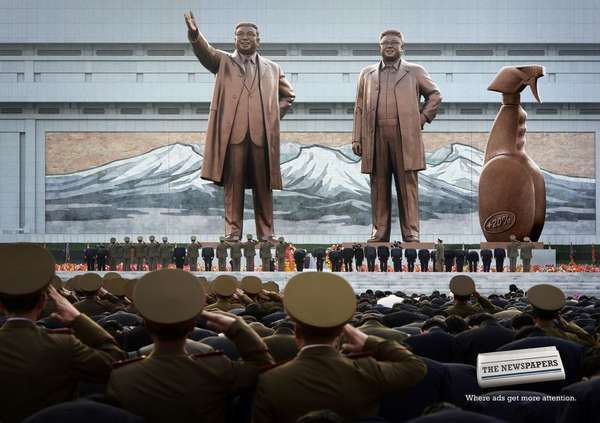 Alexander Lam — July 1, 2013 — Marketing
References: ibelieveinadv
Share on Facebook Share on Twitter Share on LinkedIn Share on Pinterest
Promoting newspaper-based advertising, the ZMG Newspaper Marketing Association launched a series of ads that feature world events with camouflaged advertisements. The campaign is composed of a series of famous photos altered to include product ads. Pictures of world leaders were changed to have works of art replaced by representations of products. The visuals are accompanied by a caption that reads "Where ads get more attention."

The ZMG Newspaper Marketing Association worked with ad agency Ogilvy to create the comical ads. With the decline in the popularity of print media, ZMG wanted to bolster sales of ad space by showing how important newspapers still are. The campaign implies that placing your ad in a newspaper elevates your product to be just as important as international news.
3.5
Score
Popularity
Activity
Freshness
View Innovation Webinars