Top 30 Computer Trends in February
Next
Set of
Related
Ideas 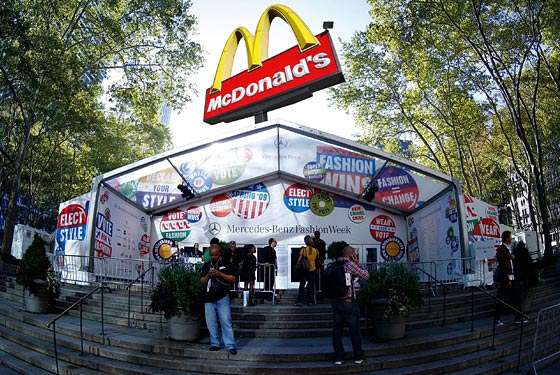 Bianca — February 15, 2009 — Marketing
References: observer & style
Mercedes Benz New York Fashion Week Fall 2009 is the first major fashion event in the big apple to be evidently hit by the current recession. No longer are they serving fine champagne at all the designer after parties—a BYOB event followed post-Proenza Schouler show this week, and the tents at Bryant Park served McDonald’s coffee!

Of course, stars like the Olsen twins and fashion queens like Vogue’s editor-in-chief, Anna Wintour, aren’t will to skimp on Starbucks just because the McD’s coffee is free (apparently the greasy food chain is the official coffee of fashion week as part of a $1 billion campaign).

Still, those who can afford it and are loyal to Starbucks will continue to go there… and will probably be interested to know that Starbucks is starting their own promotion to hype that they’re really not over-priced, offering 12-oz. lattes (yes, not drip coffee, but an espresso specialty drink!) with oatmeal for the health conscious, or coffee cake for those with a sweet tooth. Alternatively, they can get a 12-oz. drip coffee with a breakfast sandwich.


Good for Starbucks for keeping with the times and dropping prices (although I have yet to see this deal in Canada). Although some would argue it’s still overpriced, there are still millions of people with a loyalty to their Starbucks lattes that the credit crunch has yet to affect.
1.9
Score
Popularity
Activity
Freshness