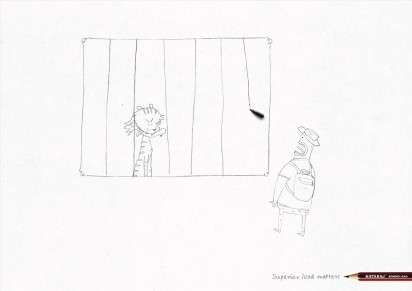 Meghan Young — January 8, 2013 — Marketing
References: ogilvy & ibelieveinadv
Share on Facebook Share on Twitter Share on LinkedIn Share on Pinterest
The Nataraj Pencil campaign illustrates how much 'superior lead matters,' as stated in its tag line. Made up of a series of simple drawings, the Nataraj Pencil campaign depicts terrifying situations in which the possibility of harm or safety is put into question. In one case, a zoo tourist stands infront of an incomplete cage as a ferocious tiger looks on. In another, a man looks on as a wrecking ball is about to drop on him. In each of these instances, a piece of lead is shown completing the drawings.