Stripping Down for Alter-Globalization 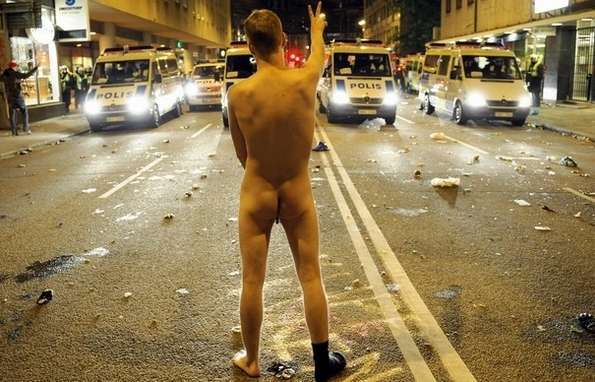 Ayman — September 23, 2008 — Naughty
References: chinadaily.cn
Share on Facebook Share on Twitter Share on LinkedIn Share on Pinterest
Now this is what a real naked protest looks like: no clothes. Well, almost. You have to count out one pair of socks, but it’s much more worthy of the title than those half-arsed efforts with undies-wearing anti-KFC impostors. I mean, if you’re gonna do it, do it right and go all for it!

So what’s all the fuss about? Well, it’s the European Social Forum being held in Malmo, Sweden. For some background, according to wikipedia, “The European Social Forum (ESF) is an annual conference held by members of the alter-globalization movement (also known as the Global Justice Movement). It aims to allow social movements, trade unions, NGOs, refugees, peace and “anti-imperialist” groups, “anti-racist” movements, environmental movements, networks of the excluded and community campaigns from Europe and the world to come together and discuss themes linked to major European and global issues. In order to coordinate campaigns, share ideas and refine organizing strategies.”

So what about our guy? Apparently, instead of violently smashing windows and causing chaos like other militants did in various city blocks (which got several arrested, naturally), this smart young man decided to bare all (down to one sock) and boldly faced the police with a victory hand sign.

Yeah, I am sure the police were absolutely terrified…
3.6
Score
Popularity
Activity
Freshness
Attend Future Festival