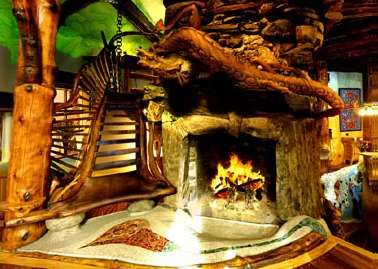 Months later, I was finally was able to gather some information about this man who had actually made a home inside this astounding piece of architecture. Believe it or not, it was as simple as looking up The Mushroom House.

It was created by an eccentric Canadian artist named Zube who lives in Whistler, British Columbia. If you've ever been to Tune Town in Disneyland, you'll be able to get a pretty good visual on what the unique home looks like from the inside. The design elements are amazing, including the incredible jacuzzi room with an underground spring.

Zube spent 22 years turning his dream into a reality, and now his creative home has become a fascination by people all over the world. Now that his vision has fully manifested, he has put his one-of-a-kind fairy tale home on the market.

Photos are so much more descriptive than words, so peruse the images in the gallery. Even better than photos (aside from the real thing, of course) is video footage, which I was unable to find online. Here are the show details.
6.8
Score
Popularity
Activity
Freshness
View Innovation Webinars