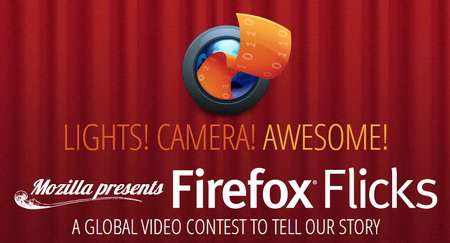 Mozilla 'Firefox Flicks' Competition Asks You to Tell a Story

Mozilla wants fans to create videos or films that tell a story about its Firefox browser, as well as the people who use it and how "one browser can build a brighter future for the Web." According to the dedicated contest site, Mozilla wants users to express their online issues and how Firefox helps them deal with those issues.

Participants can submit entries for the Mozilla 'Firefox Flicks' contest in one of four categories: Best :30 Spot, Best Animation, Best Use of New Technology and Best Public Service Announcement. Each film should target Internet users between the ages of 25 and 54. The entries will be voted on by Firefox fans across the globe, and ad execs as well as film experts will be on board to judge the pick the best videos from the bunch.

The Mozilla 'Firefox Flick' contestants whose videos make it into the judging will receive Firefox prize packs and the grand prize winner (there will be seven to represent each major region around the world) will receive either $5,000 worth of video equipement or a film school scholarship -- you choose.
0.6
Score
Popularity
Activity
Freshness
Get Better and Faster