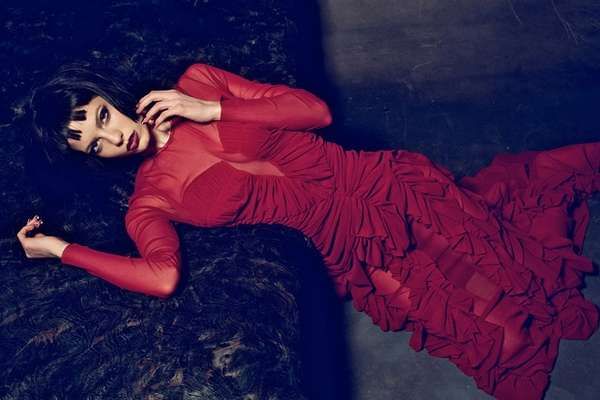 Meghan Young — January 24, 2013 — Naughty
References: morfium.net & fashionising
Share on Facebook Share on Twitter Share on LinkedIn Share on Pinterest
Merging fashion and fantasy, the Morfium Couture Pre-Fall 2013 lookbook falls in line with past photoshoots. Instead of a fable theme or even a futuristic one, this time around it focuses on dark Gothic captures. Laced with seductiveness, the images will arrest both men and women.

Titled ‘Awakening,’ the Morfium Couture Pre-Fall 2013 lookbook follows model Jefimija Jokic as she discovers her sensual side in the glamorous and skin-revealing ensembles. Posing in front of photographer Dusan Jaukovic’s lens, she manages to capture the essence of each outfits while also showing off the stunning details. Veiled, heeled, laced and draped, they are magnificently put together.

The looks in the Morfium Couture Pre-Fall 2013 catalog were perfected with choppy black bob hairstyle and deep red lips. They were styled by Jelena Malesevic.