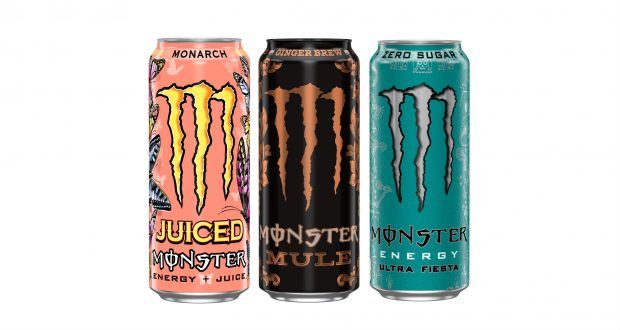 Michael Hemsworth — January 20, 2021 — Marketing
References: cocacolaep & talkingretail
Share on Facebook Share on Twitter Share on LinkedIn Share on Pinterest
These new Monster energy drinks are being launched by Coca-Cola European Partners (CCEP) in the UK to offer consumers with unexpected flavor varieties to try out when looking for an alternative energy refreshment. The drinks include the Monster Mule, Monster Ultra Fiesta and the Monster Juiced Monarch, which are each priced ranging from £1.35 to £1.54, depending on the variety. Each of the drinks will be available in four-pack formats later this year following on the brands 46% growth in this category, according to the brand.

Vice President of Commercial Development at CCEP GB Simon Harrison spoke on the new Monster energy drinks saying, "Seventy-two per cent of energy sector growth over the last year has come from new products. Much of this is thanks to the huge success of Monster’s new variants which contributed to over half of this. We know there’s big demand in the market for new and exciting flavors, including in the low-calorie energy segment. We are confident that our latest launches, supported by impactful marketing campaigns that the Monster brand is known for, will appeal to new and existing energy drinkers and will drive sustained growth throughout this year.”
8.3
Score
Popularity
Activity
Freshness
View Innovation Webinars