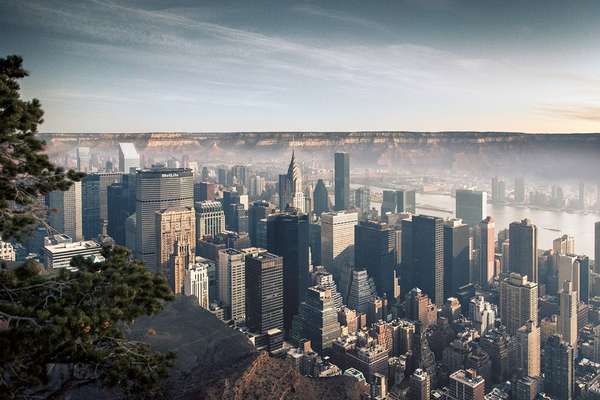 Alexander Lam — July 17, 2013 — World
References: guspetro & psfk
Share on Facebook Share on Twitter Share on LinkedIn Share on Pinterest
Using pictures of New York City and the Grand Canyon, photographer Gus Petro created dismal photos in the 'Merge' series. The photo collection features captures where parts of New York City are merged with the Grand Canyon. Petro seamlessly placed the two locations together to create a sense of extreme contrast. As a result, each piece in merge looks like a desolate metropolis dropped in the middle of an inhospitable environment.

The Merge collection was created after Petro noticed how the Grand Canyon's emptiness greatly contrasts with New York's density. Petro was struck with this realization during a recent trip to America. According to the Swiss photographer, the project combines "New York City, where, it seems like, everyone wants to live there, and Grand Canyon / Death Valley, which are unlivable."