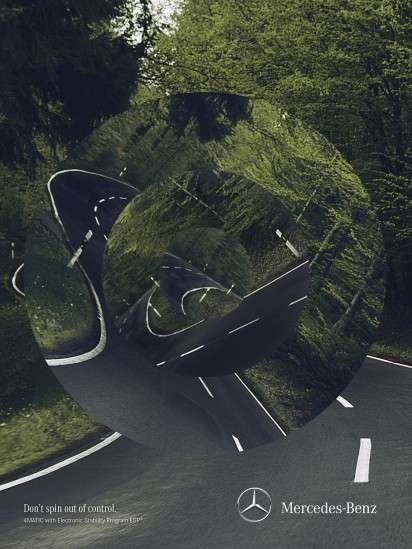 The Mercedes-Benz 4MATIC Campaign Depicts Being Out of Control

Meghan Young — January 22, 2013 — Autos
References: jvm.at & ibelieveinadv
The idea of being behind the wheel in control of everything and suddenly not so in control is incredibly scary, but the Mercedes-Benz 4MATIC campaign shows that there are some things out there that can help those situations In this case, that something is the Electronic Stability Program (ESP). It helps to ensure that people don't spin out of control when driving during certain road conditions.

The Mercedes-Benz 4MATIC campaign was created by Jung von Matt/Donau, an ad agency based in Vienna, Austria. Art directed by Georg Feichtinger with creative direction by Matthias Piskernik and Thomas Niederdorfer, the print ads might be discombobulating, but they send a strong message. The spinning perspective was created by graphic designer Katharina Kolar.
1.4
Score
Popularity
Activity
Freshness