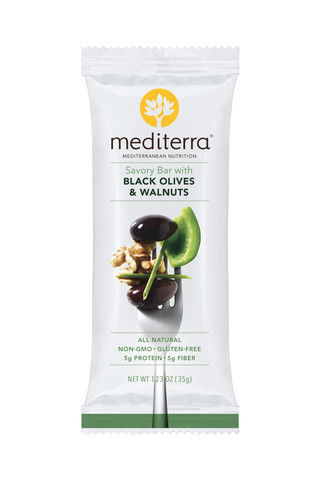 Laura McQuarrie — November 6, 2015 — Lifestyle
References: mediterranutrition
As an alternative to snack bars that features chocolate and other sweet flavors, Mediterra developed a line of four savory snack bars that highlight some of the most beloved Mediterranean flavors.

The 'Savory Nutrition Bars' include varieties like Kale & Pumpkin Seeds, Bell Peppers & Olives, Sundried Tomato & Basil, as well as Olive & Walnuts. While these flavors are the primary stars of each snack bar, there are plenty of other unusual ingredients included as well, from protein-rich pea crisps and oregano to superfood amaranth puffs and cashew butter.

Since the benefits of adopting a Mediterranean diet are known to be multitudinous, these savory snack bars provide a taste of health without requiring a drastic change in diet. As an added bonus, in each snack bar, there's somewhere between five and six grams of protein.
3.4
Score
Popularity
Activity
Freshness