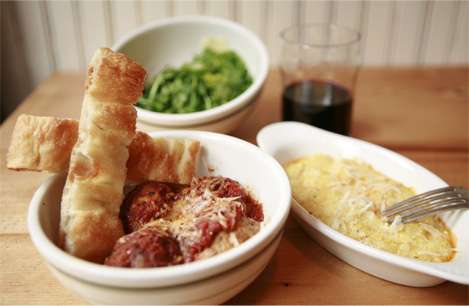 The Meatball Shop Serves the Best in the City

Olivia Chow — April 18, 2012 — Lifestyle
References: themeatballshop
Share on Facebook Share on Twitter Share on LinkedIn Share on Pinterest
The Lower East Side New York favorite 'The Meatball Shop' opened two more locations in the city within the past year. Since the first restaurant opened in 2010, it has garnered press from major publications. The new venues have kept the buzz going, and were featured in March 2012’s The Oprah Magazine. InTouch had an article on Jersey Shore’s Snooki’s visit to the restaurant. The owners appeared on E!'s Chelsea Lately. Zagat, StyleCaster, NY Times, CBS and a plethora of blogs that span food, fashion, interior decorating and nightlife decided to feature the restaurant in March 2012 alone.

For those who have not experienced this sensation, the concept is simple: meatballs done in a variety of tasty ways. The chefs take one of America’s favorite comfort foods and spin it every way possible so there is something for everyone (including vegetarian options). Fresh and sustainable ingredients are also used.