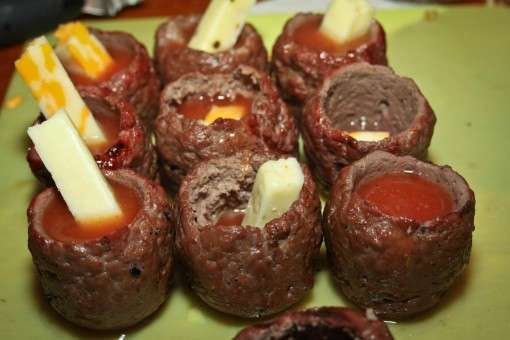 The Meat Shot Glasses by ManBQue is Made for Manly Carnivores

Meghan Young — November 20, 2012 — Lifestyle
References: manbque & ohgizmo
Share on Facebook Share on Twitter Share on LinkedIn Share on Pinterest
Drinking alcohol on an empty stomach can be the bane of many people's existence, not just the person suffering for the food oversight, but the Meat Shot Glasses will have them covered. It is exactly what it sounds like, shot glasses made out of meat. Only real men would demean themselves by drinking out of traditional glass shooters once laying eyes on this creation.

Conceived and cooked by ManBQue, an organization founded by seven friends in North Chicago, the Meat Shot Glasses are relatively simple to create. After following a basic recipe to create the ground beef, it is then molded around an actual shot glass and place on the grill, open side down. Once cooked, it is only appropriate that its filled with homemade bacon vodka.
1.6
Score
Popularity
Activity
Freshness
Get Better and Faster