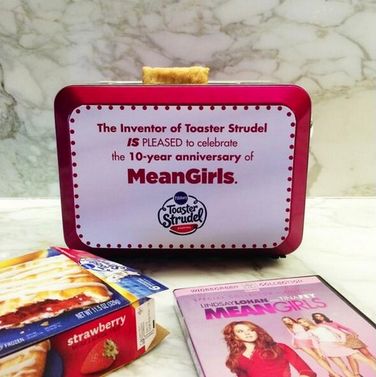 Jennifer Paul — May 4, 2014 — Pop Culture
References: twitter & buzzfeed
This Mean Girls toaster celebrates the 10th anniversary of the cult classic. Of course Gretchen Wieners would think this is very fetch. Her father, being the inventor of the toaster strudel, must have been very happy about the anniversary. If you were wondering, this is a legitimate toaster that works.

I must say that this is a great gift to celebrate the 10th anniversary of the movie Mean Girls. You will never eat another strudel the same way after making it in this Mean Girls toaster. I can't think of a more memorable gift for a fan of the film.

The Mean Girls film is an iconic teenage movie that featured a great cast, great comedy and great camaraderie. If you haven't seen the film you better watch it, or you might end up in the burn book.
0.4
Score
Popularity
Activity
Freshness