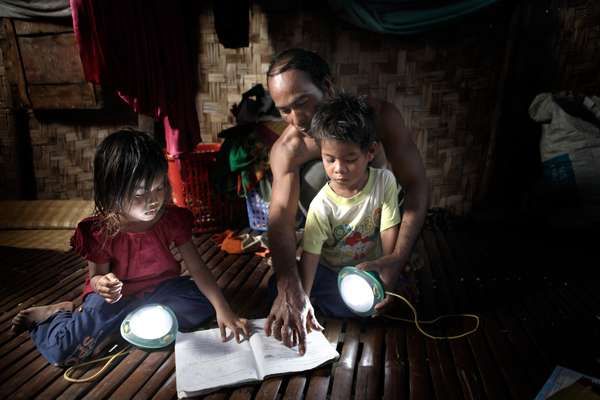 The Mathieu Young 'Cambodia by Moonlight' Series is Immensely Powerful

Corinne Guirgis — August 16, 2011 — World
References: mathieuyoung & behance.net
Share on Facebook Share on Twitter Share on LinkedIn Share on Pinterest
The Mathieu Young 'Cambodia by Moonlight' photo series is an incredibly powerful photo essay that creates intense moments while educating audiences about the struggles of a developing nation. The photos tell the story of the MOONLIGHT, a solar powered lantern designed to aid in tasks like cooking, eating and reading, and replace the typically dangerous kerosene lamps that have been in place for some time.

Built and designed in collaboration with the rural Cambodians who make use of it, the lamp was first adopted for everyday use in villages around Kandal Province, where Young's photos were so artfully taken. Rental of these multi-purpose lamps costs a mere $.08/day and drastically improves the lifestyles of its users, seeing as over 70% of the country has no access to the power grid. This is not the first photo essay which the talented and socially minded Young has shot in Cambodia, and other locations of choice include California, New Orleans and East Africa.

Implications - While art is most often recognized for its portrayal of raw and familiar emotion, another central purpose is the portrayal of the unfamiliar. A photographer or artist with the capacity to tell intriguing stories connects to viewers with a lust for expanding their worldview through alternative and interesting lenses.
5.8
Score
Popularity
Activity
Freshness
Attend Future Festival