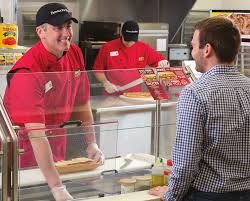 Kalina Nedelcheva — March 10, 2020 — Lifestyle
References: caseys & csnews
Share on Facebook Share on Twitter Share on LinkedIn Share on Pinterest
Casey's General Store is taking advantage of the concept of gamification with its March Madness-themed rewards program that is based around a match-up game. The initiative will definitely capture consumer attention as it will allow guests to vote on one-on-one matchups. The tournament is bracket-based and will pin brands against one another. For example, one round might have guests decide which they prefer—Coke or Mtn Dew. Naturally, the match-up game will eventually lead to a championship round. With each vote they cast in the March Madness match-up game, consumers unlock special offers at Casey's General Stores such as "buy one, get one half-off pizza deal."

The entertaining March Madness rewards program is set to last until March 16th and consumers can participate through Casey's website, mobile app, and social media profiles.