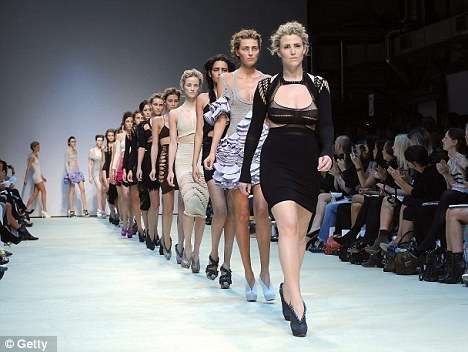 Mark Fast's Plus-Sized Models Cause Staffers to Walk Out

Jacqueline Parrish — September 25, 2009 — Luxury
References: markfast.net & dailymail
Share on Facebook Share on Twitter Share on LinkedIn Share on Pinterest
London Fashion Week is notorious for sickeningly slender models tramping up and down the catwalks in the latest designer goods; in an attempt to change that, Mark Fast’s plus-sized models rocked his runway, but not before causing a backlash of his staff that resulted in several people losing their jobs.

Mark Fast’s plus-sized models, ranging from a size twelve to a fourteen, accompanied the “regular” (and by regular, I mean the skeletal norm) models in an attempt to show that Fast’s garments could be worn by women of any size.

Unfortunately, not everyone accepted Fast’s plus-sized models. Indeed, one staffer was fired after being abusive to the full-figured models while another one quit in protest, and yet another one tried to squish them into fat-sucking in Spanx to create a slimmer silhouette. One has to give the designer points for trying.
3.7
Score
Popularity
Activity
Freshness
Get the 2021 Trend Report FREE