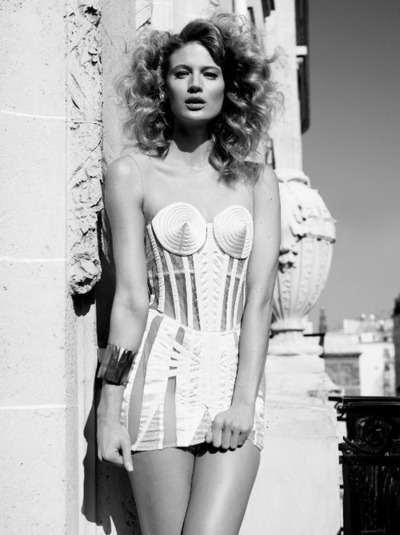 — May 11, 2013 — Naughty
References: fashionistas.gr & visualoptimism.blogspot
Share on Facebook Share on Twitter Share on LinkedIn Share on Pinterest
In his new editorial '325 Rue St. Martin,' photographer Nicolas Valois attempts to capture the sultriness of 1950s icon Marilyn Monroe while giving a modern twist to his bold images. The spread, shot for ODDA magazine, stars model Michelle Buswell as Marilyn. Each photo features clothing by Gaultier and emulates some of Monroe's most famous outfits, such as her ballerina tutu.

Buswell, clad in elegantly voluminous skirts and retro corsets, looks coyly into the camera in various suggestive poses, re-creating the sensuality that defined the famous Monroe. With this editorial, Valois has been extremely successful in producing a modern-day Marilyn. The outfits by Gaultier are stunning in their simplicity, and when paired with Valois's soft-lit photography and Buswell's intimacy with the camera (and her male model), the result is an exquisite editorial that cements Marilyn Monroe's memory into the modern fashion industry.
5.9
Score
Popularity
Activity
Freshness
Access Advisory Services

Sweet Celeb Candy Portraits
These Celebrity Portraits Are Made with Over 5,000 Candy Pieces