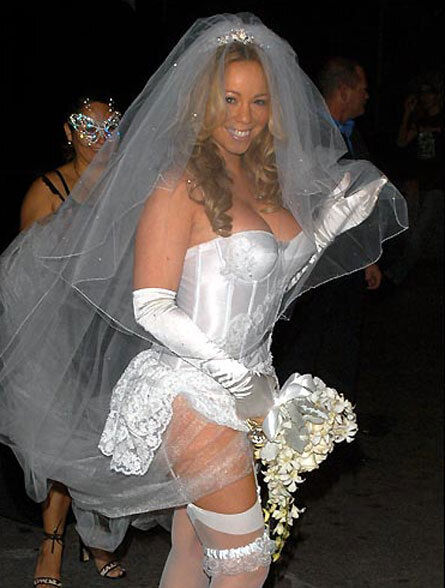 â€œWhen I was in an unhappy place in my life ... I always wanted to be kidnapped,â€ Mariah told Elle magazine. â€œI just wanted a way out, but I didn't have one.â€

Cannon proposed to the songstress with a 17-carat diamond hidden inside a candy ring lollipop, a cheesy, but cute and fitting for way to 'pop' the question to girlie Mariah Carey: at least the first time around.

â€œHe sort of kidnapped me and took me on a helicopter ride,â€ she says. â€œThen he re-proposed.â€

Despite rumors that the couple would host a lavish, $4 million wedding, Mariah says their recent quick elopement in the Bahamas was just fine.

"What do they think? Our whole point (in having the unannounced beach wedding) was to do the opposite!"

Her June 1993 wedding to her boss, Tommy Mottola, (seen in the gallery) cost close to $500,000, a price which included her Vera Wang gown (complete with 27 foot train) and staff costs like hiring 200 security guards and dressing 47 flower girls.

â€œThey've been calling me Cinderella since I first started out,â€ she said of her current engagement to Cannon. â€œMost people would think, OK, please! This doesn't happen in real life.â€

What I, and likely many others, am wondering is what the dress would like like with a $4 million budget! Would she go uber luxurious in a fluffy princess gown, or sex it up in a revealing number?
5.6
Score
Popularity
Activity
Freshness
Attend Future Festival