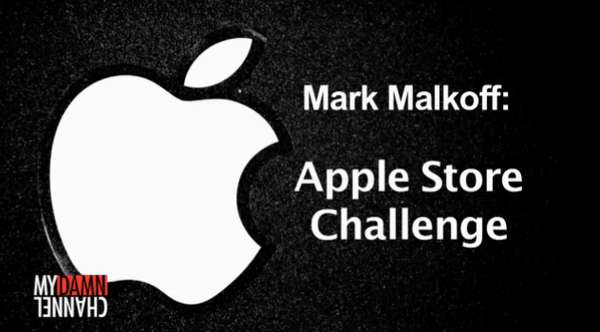 Marie C. Hudson — July 27, 2011 — Unique
References: mydamnchannel & gizmodo
Share on Facebook Share on Twitter Share on LinkedIn Share on Pinterest
The Mark Malkoff Apple Store Challenge tests just how far customers can go before they are refused service or asked to leave the company's store. With the recent influx of YouTube dance-off videos filmed inside Apple Stores, its employees have gained a reputation of being extremely friendly and unintrusive. Malkoff set out with a series of ridiculous stunts to different stores in NYC, beginning with a more subtle task -- ordering a pizza to the second floor of a SoHo store. After this test went off without a hitch, Malkoff's stunts became more elaborate: a romantic date with his wife, a dramatic entrance wearing full Darth Vader garb, and finally, he carried a goat around the store with him. At each of the stores, Malkoff was treated just like any other customer, and was not once bothered by an Apple employee.

The Mark Malkoff Apple Store Challenge is a testament to the service provided by the company, as well as the store's friendly atmosphere. I'd love to see Malkoff and others attempt other crazy stunts in the future!
4.7
Score
Popularity
Activity
Freshness
Attend Future Festival