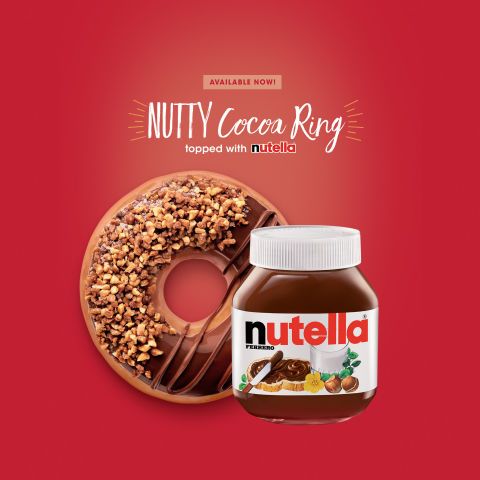 Krispy Kreme's Newest Donuts are Made with Nutella Hazelnut Spread

Katherine Pendrill — December 27, 2016 — Lifestyle
References: businesswire & brandeating
Share on Facebook Share on Twitter Share on LinkedIn Share on Pinterest
For those who haven't had their fill of chocolate this holiday season, Krispy Kreme has debuted two decadent new donuts that are made with Nutella. For avid fans of the iconic chocolate hazelnut spread, these fluffy pasties are the ultimate form of indulgence.

As part of the partnership between Krispy Kreme and Nutella, customers will be able to order two new donuts flavors from the chain. The first is the Nutty Cocoa Ring Donut, which is a yeast donut that has been dipped in Nutella and topped with a layer of crushed hazelnuts and chocolate icing drizzle. The second chocolatey creation is the Chocolate Hazelnut Kreme Donut, which is a yeast donut made with Nutella Kreme, topped with a Nutella icing, candied hazelnut pieces and a mixture of white and milk chocolate drizzle.

While the chain has offered Nutella-filled creations in the UK for some time, this marks the first time that Krispy Kreme has sold a Nutella donut in the US.
1.2
Score
Popularity
Activity
Freshness
View Innovation Webinars