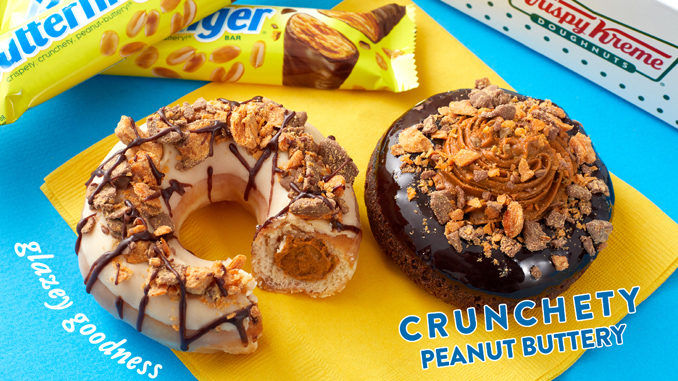 Michael Hemsworth — February 21, 2020 — Lifestyle
References: krispykreme & chewboom
The Krispy Kreme Butterfinger doughnuts have been announced as a range of candy bar-inspired indulgences for consumers who are looking for a new option to enjoy. The doughnuts come in two varieties including the Butterfinger Fudge Cake Doughnut, which is a chocolate cake doughnut that has been dipped in chocolate icing before being topped with a Peanut Butter Chocolate Kreme and pieces of Butterfinger. The Butterfinger Original Filled Doughnut, on the other hand, starts off with one of the brand's Original Glazed doughnuts filled with the Peanut Butter Chocolate Kreme, dipped in Butterfinger icing and topped with pieces of Butterfinger and a chocolate drizzle.

The Krispy Kreme Butterfinger doughnuts are available now at participating locations nationwide, but only for a limited time.