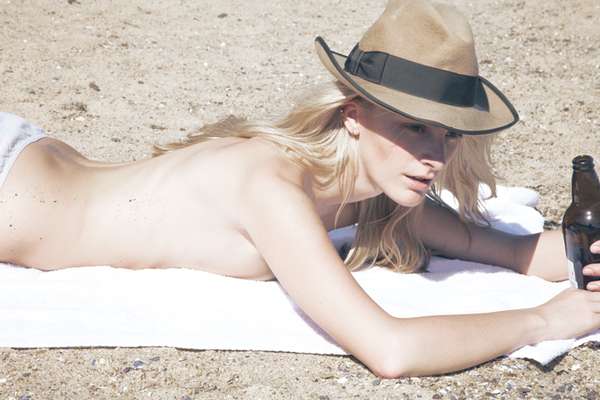 Jordan Sowunmi — June 25, 2011 — Fashion
References: macushlaburke.net & bentrovatoblog
Share on Facebook Share on Twitter Share on LinkedIn Share on Pinterest
Melbourne, Australia based model-cum-photographer Macushla Burke is a young shutterbug with an eye for capturing an understated sensuality that many photographers cannot. For her latest shoot, Macushla Burke takes Australian model Christina Dietze to the beach to capture the mood of a slow-paced, lonely day near the water.

The shoot features Dietze dressed in a series of loose fitting, boho-chic ensembles that do a great job of accentuating her thin body. Her outfits alternate between holed ponchos, a white button down, and sensual bikini bottoms and a fedora.


Macushla Burke does a fantastic job of letting the location and her model tell the stoory of the shoot, which has personal feelings attached to it. "This fashion story conjures up a lot of feelings for me," she told the Ben Trovato Blog. "As well as encompassing one of my favourite albums when I was growing up. It reminds me of broken hearts, teenage angst, rebellion, wandering aimlessly with beauty in solitude."

Macushla Burke does a great job of encompassing all of those themes in Dietze's booze-assisted beach jaunt.

Implications - One of the most important elements of an advertising campaign is how memorable it is. One of the easiest ways for a company to create a memorable advertisement is by relying on sexually charged advertising to propel the movement. By featuring an ad with overt sexual content, the ad campaign will attract immediate interest and brand awareness from consumers and critics of the ad's content.
6.8
Score
Popularity
Activity
Freshness
View Innovation Webinars