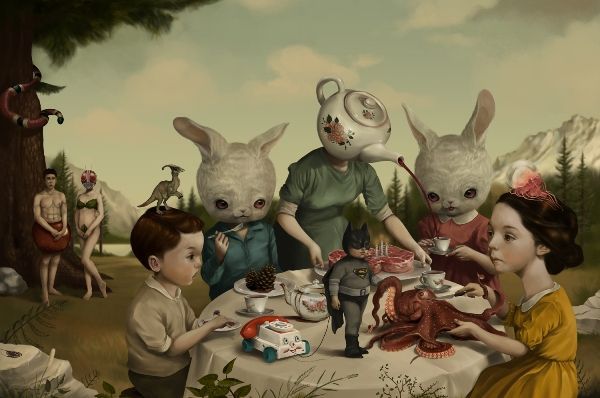 Alyson Wyers — October 20, 2013 — Art & Design
References: lobilob.blogspot & designtaxi
Share on Facebook Share on Twitter Share on LinkedIn Share on Pinterest
This macabre art by Roby Dwi Antono are reminiscent of Alice’s Adventures in Wonderland, but are portrayed in a much darker variation. Both children and animals inhabit a make believe world, where relations seem strained. The eerie images are done in a surrealist style, but also incorporate time-travelling touches, including a Fisher Price phone, Batman, an astronaut and an alien soldier.

Several pieces of this macabre art depict children with rabbit heads and holding internal organs. Diminutive dinosaur-like creatures are also prevalent. One particularly chilling image shows a young girl in front of a whale whose womb has been cut open, showing guts spilling out as she holds a new baby with the umbilical cord still attached while two girls look on. One has a rabbit head where the other has a leafy green tree top and is naked.