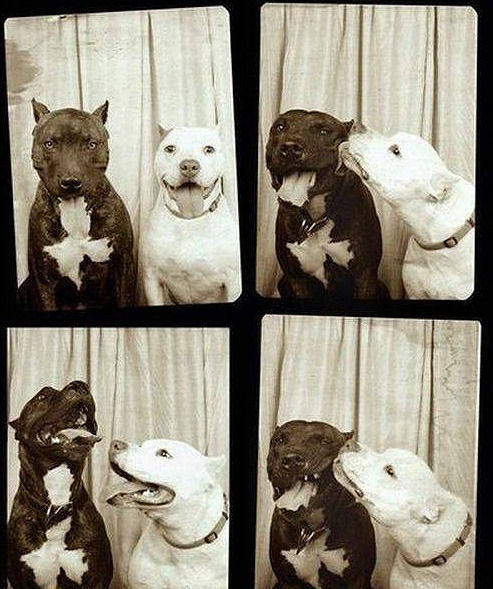 Jennifer Paul — March 3, 2014 — Lifestyle
References: lynnterry & boredpanda
Share on Facebook Share on Twitter Share on LinkedIn Share on Pinterest
These photographs by Lynn Terry are absolutely adorable. The two Pit bulls have a "bad dog" reputation, but as you can see in these photos, they are angelic. Bumper is one of the dogs and was rescued from a dog fighter by Mutts n Stuff. The other pup, Willis, was born to a mother that was involved in dog-fighting. Both Willis and his mother were saved from the fighting lifestyle.

Lynn Terry decided to post the photos on Valentine's Day 2014. The images, along with others, are from a photo booth photo shoot she did just to mark the day. More dogs were involved in the photo booth series including Dalmatians who also have a bad reputation of being vicious, Bull Dogs and a few mixed breeds.

The beautiful photographs exemplify why we love animals so much and just leave a great feeling of unconditional love and friendship.
4.6
Score
Popularity
Activity
Freshness
Get Better and Faster