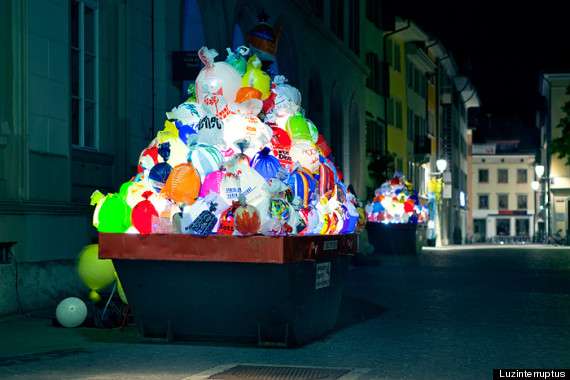 The Luzinterruptus 'Plastic Garbage Guarding the Museum' is Bold

Sarah Nazim — July 30, 2012 — Art & Design
References: luzinterruptus & huffingtonpost
Share on Facebook Share on Twitter Share on LinkedIn Share on Pinterest
The Luzinterruptus 'Plastic Garbage Guarding the Museum' is an attempt to raise environmental awareness when it comes to waste. This project took place in Gewerbemuseum Winterthur in Switzerland and the artist gave out museum tickets in exchange for plastic bags.

The idea behind this piece is to glamorize waste, being plastic bags in this case, and then watching them decompose over time, which diminishes its glory. It symbolizes mindless consumption, and is aimed to influence society to reduce waste.

The artist filled the bags with air and then lit them up to resemble balloons. It is quite the spectacle, and trade-off for those who contributed, as they got free museum tickets. By creating an interactive experience Luzinterruptus was not only able to draw attention to the cause, but also got people involved in the process.

Floating Poetry
Luzinterruptus Remembers the Past With Written Words