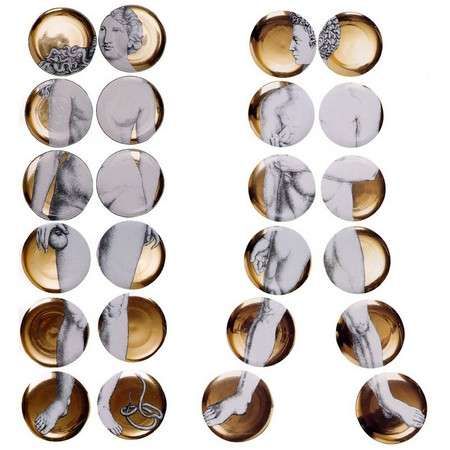 Fashion Spy — July 20, 2006 — Art & Design
References: unicahome
Share on Facebook Share on Twitter Share on LinkedIn Share on Pinterest
To nobody's surprise, China plates aren't cool anymore. But art plates? That's cool. Accordingly, we introduced you to the $48 Los Angeles Plates last week. Want something a little more unique? How about the Adam and Eve Plates by Piero Fornasetti? At $5,400, a pair of the painted gold plates aren't a bargain, but you have to pay a premium when you're dining on art. It doesn't matter anyways because you'll probably want these plates on your wall.

"Designed by piero fornasetti, the classically inspired adam and eve face off once again in a series of twelve 10.24" plates (each). available in black and white or gold versions. the plates measure 10.25" diameter and are produced by hand to order in the atelier in milan. completely handmade, the plates are still manufactured to the exact specifications passed from piero to his son, barnaba." - Unica

About the artist: "Born in Milan in 1913, Piero Fornasetti was a painter, interior decorator, and designer with an enduring sense of humor in his production (estimated at over 11,000 items). Fornasetti's primary output consists of strong graphics resulting in an interplay between reality and illusion. trompe l'oeil and classical imagery also have an interplay."
6.1
Score
Popularity
Activity
Freshness
Access Advisory Services