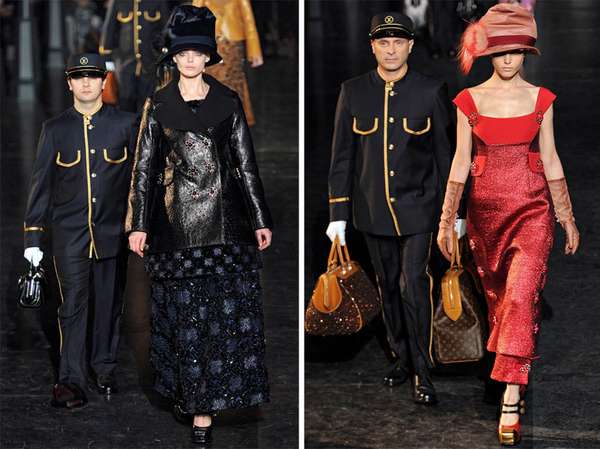 Meghan Young — March 9, 2012 — Fashion
References: louisvuitton & fashiongonerogue
The Louis Vuitton Fall 2012 runway show highlighted old world-inspired outfits by having the models shadowed by uniformed porters. Creating a theme of travel, these elegant ladies confidently strutted up and down the catwalk as though it were a tarmac leading to a private plane or a path to a five-star hotel.

In fact, creative director Marc Jacobs was inspired by turn of the century train stations when conceiving the Louis Vuitton Fall 2012 runway setting. Despite the big hats and long, layered dresses, the ensembles were modernized versions of 20th-century style. The lean, classic silhouettes were made up of cropped jackets and buttoned leggings. Although the palette was predominantly subdued, Jacobs incorporated bold prints and patterns.
3.2
Score
Popularity
Activity
Freshness