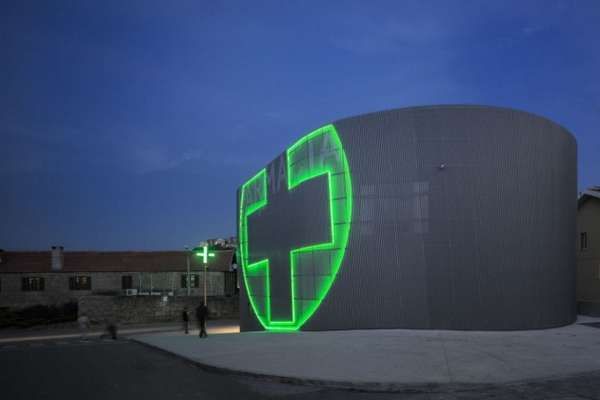 Meghan Young — January 4, 2013 — Art & Design
References: josecarloscruz & contemporist
Share on Facebook Share on Twitter Share on LinkedIn Share on Pinterest
Medicine and medical treatments are often at the forefront of innovation, so it is only natural that a store selling pharmaceutical drugs would look as futuristic as the Lordelo Pharmacy. Located in Vila Real, Portugal, the Lordelo Pharmacy might as well have once been attached to a spaceship. Pristine white with a neon green sign of the universal pharmacy cross, it provides a stark contrast to its otherwise dated surroundings.

The Lordelo Pharmacy was designed by Architect José Carlos Cruz. Created to have a neutral presence, the Lordelo Pharmacy boasts an aluminum covered oval exterior with an absence of openings. With only one entrance, the building has been well lit from within. Nevertheless, while modest during the day, the Lordelo Pharmacy comes alive at night.
5.5
Score
Popularity
Activity
Freshness
Get the 2021 Trend Report FREE