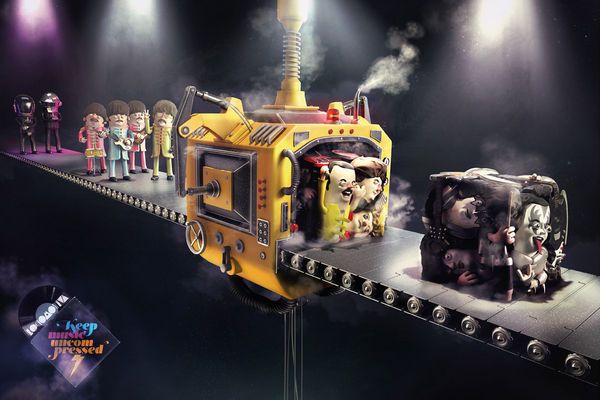 Meghan Young — May 2, 2014 — Marketing
References: cheil & adeevee
Share on Facebook Share on Twitter Share on LinkedIn Share on Pinterest
There is a reason why the quick and high quality compression program fictionally developed on the television show 'Silicone Valley' is so highly coveted and the Locomotiva Discos ad campaign addresses it: the sound is so much more enjoyable. In this case, however, the ad campaign urges people to 'keep music uncompressed' in order to maintain quality over convenience.

Conceived and executed by Cheil, an ad agency based in São Paulo, Brazil, the Locomotiva Discos ad campaign depicts famous musicians and bands including Amy Winhouse, Kiss and Luciano Pavarotti as being constricted by a machine as they go down a conveyer belt. It was art directed by João Gabriel Gragnani and Thiago Fernandes with creative direction by Fred Sartorello. The cartoonish images cleverly visualizing the undesired compression were shot and illustrated by Studio Mutato.
1.3
Score
Popularity
Activity
Freshness
View Innovation Webinars