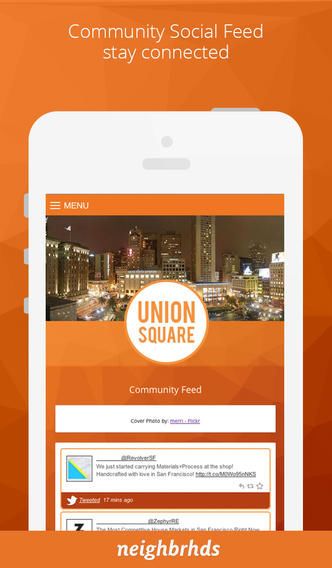 Laura McQuarrie — December 5, 2014 — World
References: neighbrhds & psfk
Share on Facebook Share on Twitter Share on LinkedIn Share on Pinterest
Often, the reach of social media is too broad and you end up missing out on connections with others in your own city, but the local apps from Neighbrhds remedies this. Rather than having just one app that does it all for the entire city, Neighbrhds consists of a series of localized mobile apps for a number of different communities. A couple of the standalone apps that can be downloaded include dedicated social feeds for areas like Pacific Heights, Union Square, Dogpatch and South Beach in San Francisco for example. Other cities with their own neighborhood apps include Los Angeles and Las Vegas.

With each app, what you can expect to appear on your newsfeed include updates about local community events, businesses, hot spots for food, drinks and entertainment within that area, as well as real estate listings.
2.7
Score
Popularity
Activity
Freshness
View Innovation Webinars

Household Exploration Apps
Homes by Tinybop is a Fun, Educational App for Kids