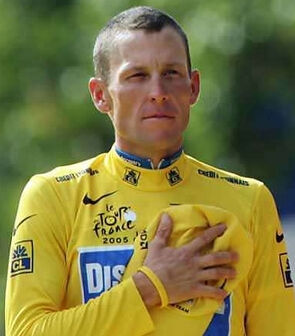 Lance Armstrong Teams With Nike To Expand Into Fashion

Bianca — November 21, 2007 — Celebs
References: livestrong.org
Share on Facebook Share on Twitter Share on LinkedIn Share on Pinterest
After Lance Armstrong's LIVESTRONG wristbands became a mainstream fashion trend, the cyclist decided to expand his brand to include apparel. He teamed with Nike to produce a range of apparel, footwear and accessories including tshirts, cold weather essentials, stocking stuffers like visors, and, of course, cycling gear. There's something for everyone, male and female, young and old.

There is also has a range of LIVESTRONG pet collars and leashes, so if you want to support the cause, but don't feel the clothing really suit your personal style, just get Fido to sport the logo for you. On the other hand, if you love the clothes, you and your pooch can be live examples of the old "dogs look like their owners," saying.

All profits go to the Lance Armstrong Foundation in support of cancer survivorship programs. Lance was diagnosed with an aggressive form of testicular cancer which later spread to his lungs and brain.

"During his treatment, before his recovery, before he even knew his own fate, he created the Lance Armstrong Foundation," the LIVESTRONG site explains. "This marked the beginning of Lance's life as an advocate for people living with cancer and a world representative for the cancer community."
5.4
Score
Popularity
Activity
Freshness
Attend Future Festival