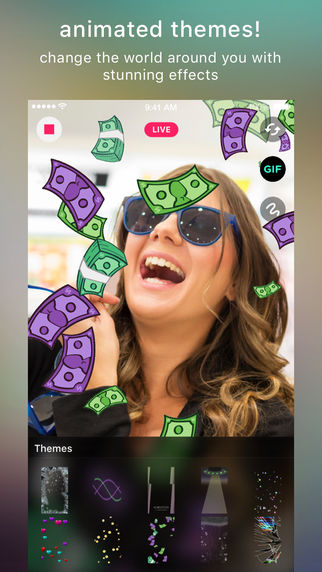 Katherine Pendrill — November 2, 2015 — Tech
References: itunes.apple & refinery29
Share on Facebook Share on Twitter Share on LinkedIn Share on Pinterest
'Kanvas' is a new app that allows users to broadcast and edit live videos at the same time. While the idea of live streaming is nothing new, these kinds of platforms do not offer many opportunities for creativity. Kanvas adds a new level of imagination to the idea of live streaming by including animated features.

The AOL-owned app allows users to stream live videos in the same way as applications such as Periscope. However, Kanvas also allows users to edit their live videos at the same time. Users can add animated extras such as Photo Booth-style filters, animated stickers, drawing tools and full-video themes. These features allow users to do everything from simulating a rainstorm to adding beating hearts stickers. As app developer Vic Singh explains, "Our goal is to...give people a window into people’s lives — but in a fun, simple way that doesn’t feel like it’s daunting."

The app ultimately provides a fun and creative way for users to share live videos with friends.
1
Score
Popularity
Activity
Freshness
Get the 2021 Trend Report FREE