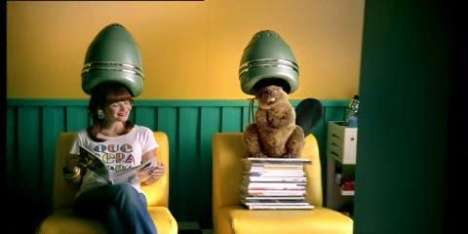 Lauren G — March 14, 2008 — Naughty
References: news.au
Share on Facebook Share on Twitter Share on LinkedIn Share on Pinterest
An Australian tampon company has pushed the boundaries of advertising, with a television campaign showing an attractive, young woman and her pet beaver eating lunch, having their nails done, at the hairdresser, and being gawked at by men on a beach. The ad ends with a voice-over, "You've only got one. So for the ultimate care down there, make it U." The woman then hands a packet of tampons to the beaver as a gift.

Although the Kotex advertisement has been broadcast only after 8.30pm, the Advertising Standards Bureau has already been flooded with a large number of complaints.

Kotex has defended its portrayal arguing that the product range was targeted at 18 to 24-year-old women, most of whom had euphemisms for their genitals. "People use euphemisms to make themselves feel more comfortable about talking about their own anatomy," Ms Warneford said. Kotex research found people in that age group had 181 alternative names for the vagina and 94 per cent said they used nicknames for their own genitals. The term "beaver" was the 11th-most used by the people surveyed. "The advertising is the result of extensive research which is right on target."