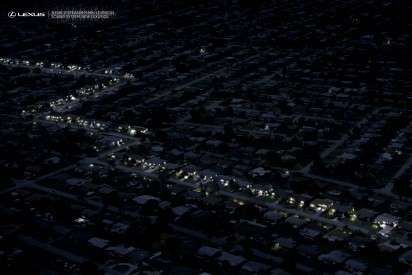 Meghan Young — June 16, 2012 — Autos
References: saatchi & ibelieveinadv
Share on Facebook Share on Twitter Share on LinkedIn Share on Pinterest
The Lexus GS campaign is rather abstract. The lights lining the road that the car just zoomed down represent all of the people awoken by its loud audio system, switching on their lights in surprise and, of course, anger. A clever concept, it nonetheless might leave people scratching their heads at first since there is no real tag line explaining the imagery. Nevertheless, people might clue in when they realize the Lexus GS campaign is honing in on the 835W. 17 Speaker Mark Levinson Sound System.

Conceived and executed by the Saatchi & Saatchi ad agency based in Sydney, Australia, the Lexus GS campaign creatively visualizes a somewhat common occurrence, although perhaps not on this scale. It was art directed by Nils Eberhardt with creative direction by Damon Stapleton.
1.2
Score
Popularity
Activity
Freshness
View Innovation Webinars