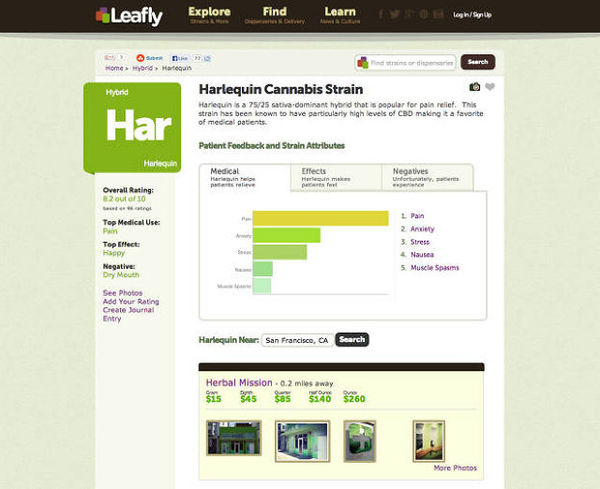 Laura McQuarrie — April 23, 2014 — Lifestyle
References: leafly & fastcompany
Share on Facebook Share on Twitter Share on LinkedIn Share on Pinterest
Just as there's Yelp for foodies, there's Leafly for people on the hunt for pot. With the drug now mostly legal in two US states and 21 states accepting the use of medical marijuana, Leafly is one startup like many others that's getting the jump on the relaxing state laws.

Leafly describes itself as the "world's largest cannabis strain resource," as it features over 50,000 different kinds of marijuana, plus over 20,000 dispensary reviews. Since it's difficult to know where to start, on a daily basis Leafly highlights one of its thousands of strains on its home page, showing off its reviews and ratings. As well, users can search for a particular strain in reverse by looking up its attributes, effects or recommended medical uses. When you join Leafly, there's also the option to filter the strains by your favorites, as well as ones you have and have not yet reviewed.
4.3
Score
Popularity
Activity
Freshness
View Innovation Webinars